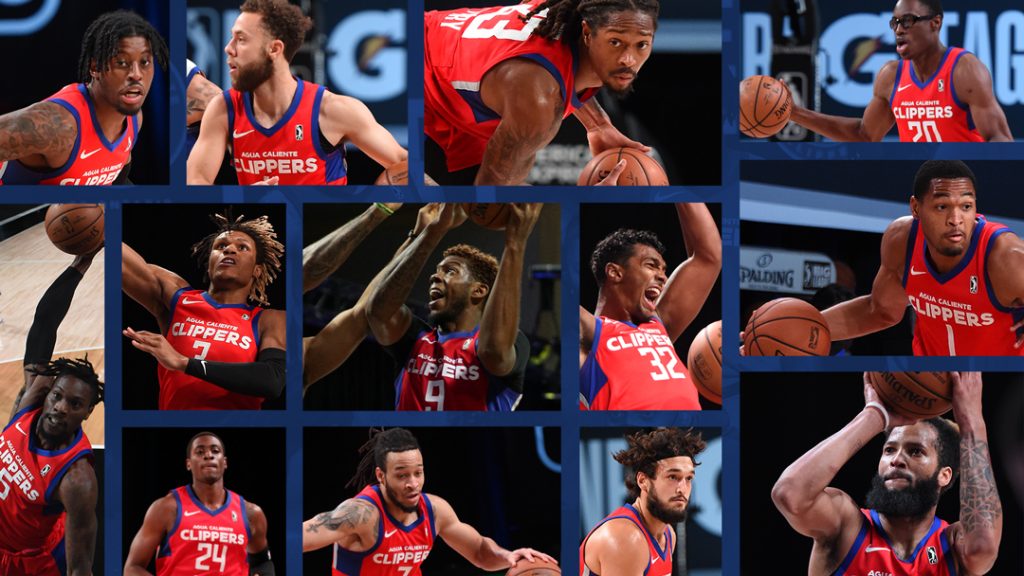 1) The Clippers and Canton Charge (Cleveland Cavaliers), entering the matchup on Friday, February 19th, were both looking to reach .500 for the season. Looking to avenge last season’s 104-107 loss to the Canton Charge, the Clippers extended their five-point first quarter lead to 16-points heading in the break, as James Palmer Jr., Donte Grantham, and Jahmi’us Ramsey combined for half of the team’s points, with 28. With half a quarter left in the third, the Clippers stretched their lead to 23, maintaining a double-digit lead until the clock struck zero, securing a 117-104 win. Antonio Blakeney (Canton) scored a game-high of 34 points off the bench. The Clippers, doing so in back-to-back games, matched a season-high with six players scoring in double figures, with Tyrone Wallace leading the way with 28 points and adding seven rebounds and five assists. James Palmer Jr. and Jahmi’us Ramsey chipped in 17 points. The Clippers’ starting unit outscored Canton’s starting unit 83-42.

2) Entering Sunday’s (2/21) contest, Agua Caliente Clippers and Lakeland Magic (Orlando Magic) had not faced each other since the 2018-2019 season, a game in which the Magic defeated the Clippers 131-120. Meeting at AdventHealth Arena, the Magic (3-3) were coming off a two-point defeat to the Oklahoma City Blue. The Clippers saw seven players score in the first quarter, and with improved defense in the following quarter, entered halftime with a 53-46 lead. The five-three pointers knocked down by the Clippers, compared to Lakeland’s two, proved to be the nine-point difference in the second quarter. Staying afloat due to the efforts of Mamadi Diakite and D.J. Hogg, Lakeland climbed back in the fourth from an 11-point deficit, tying the game at 81 with a little more than eight minutes remaining. Jordan Ford netted a three-pointer off of a Tyrone Wallace assist with 3.5 seconds left, evening the score at 100 sending the game to overtime. In overtime, Diakite’s dunk with 47 seconds was the closing basket, as Lakeland defeated the Clippers 104-102. Wallace recorded his second game of at least 25 points and five assists, notching 25 points and six assists.

3) Monday, February 22nd featured a California showdown in Orlando, Florida, as the Agua Caliente Clippers (3-4) hosted the Santa Cruz Warriors (Golden State Warriors). The Warriors (4-3) entered the matchup riding a three-game winning streak; three games won by a total of only 12 points. Last season, the Clippers and the Warriors faced each other a total of five times, including two matchups in the 2019 NBA G League Winter Showcase. Santa Cruz came out victorious in all five meetings. In their first contest for the 2021 season, the Clippers took a 34-30 lead heading into the second quarter, as Donte Grantham, Jahmi’us Ramsey, and James Palmer Jr. combined for 25 points. The second quarter proved to be the turning point, as the Warriors outscored the Clippers by 21 points, and headed into halftime with a 17-point lead. The Clippers shot only 25% in the quarter compared to the Warriors’ 60%. In the second half, the Warriors continued to expand their lead, eventually completing a 129-90 of the Clippers. The Warriors bench outscored the Clippers reserves 65-34, led by Ryan Taylor (23 points) and Kaleb Wesson (19 points). Donte Grantham and Emanuel Terry proved to the bright spots for the Clippers, as they combined for 22 points on 8/12 shooting.

4) The Agua Caliente Clippers (3-5) were looking to snap their two-game losing streak, while their opponent, the Long Island Nets (Brooklyn Nets), were fresh off a 109-97 victory over the acclaimed G-League Ignite team. Starters BJ Johnson, Reggie Perry, and Jeremiah Martin entered Wednesday averaging a combined almost 60 points per game. A fairly even contest heading into halftime, the Clippers led 57-55. The Nets turned the two-point deficit to a nine-point lead at the end of the third quarter and never looked back, defeating the Clippers 101-94. Although the Clippers outscored the Nets 56-48 in the paint, the Nets notched four more treys. James Palmer Jr. kept on pace with season average of 16.1 points per game, scoring 17 and adding five assists. Tyrone Wallace, the 15th leading scorer in the G League, led the way with 20 points. Emanuel Terry, ranking 8th in the G League in rebounds per game with 10.3, pulled down nine rebounds.

1) Amir Coffey, two-way player for the L.A. Clippers and Agua Caliente Clippers, remained with the L.A. Clippers for the week. In a 96-114 loss to the Utah Jazz, Coffey saw 26 minutes of action, which resulted in 13 points, on 5/6 shooting from the floor, to go along with four rebounds.

2) Former Agua Caliente Clipper Terance Mann has been making a significant impact in the backcourt for the L.A. Clippers, seeing action in 29 of the 32 games and recording five games with double digit scoring. In the Clippers latest victory on Tuesday evening against the Washington Wizards, Mann recorded a 12-point, four-rebounding outing.

3) Jahmi’us Ramsey, the 43rd pick in the 2020 draft joining the Agua Caliente Clippers on behalf of the Sacramento Kings, was featured on the segment, Poster Boys, on the program SportCenter with Scott Van Pelt. The segment displays the best dunks from the week. The high-flying dunk can be seen from the 13:40 to 14:02 here: https://www.youtube.com/watch?v=sh00JveTEh0