“Paul is a lifelong teacher who has spent most of the past 30 years working with young, talented players,” said president of basketball operations Lawrence Frank. “He brings to the Agua Caliente Clippers a wealth of experience, a passion for development and an understanding of our organizational principles, having already served within our front office. Paul has assembled an impressive staff of assistant coaches, with diverse perspectives and skills, who will help prepare players for the next level.”

Hewitt, a Clippers player evaluator for the past four seasons, comes to Agua Caliente with 18 years of head coaching experience. He spent four seasons as the head coach at George Mason University (2011-15) and 11 as head coach at Georgia Tech (2000-11), leading the Yellow Jackets to the NCAA Tournament five times (2001, 2004, 2005, 2007, 2010) and advancing to the national championship game in 2004. Hewitt was named the ACC Coach of the Year for the 2000-01 season and is the third-winningest coach in Georgia Tech history (190-162). The Kingston, Jamaica, native began his head coaching career at Siena College, where he coached three seasons (1997-2000), winning MAAC Coach of the Year in 2000. Hewitt led Siena to a MAAC Tournament championship and an NCAA Tournament berth in 1999 while posting a 66-27 record during his tenure.

Nakase enters her ninth season with the Clippers organization and rejoins Agua Caliente as an assistant coach, a position she held during the 2017-18 campaign. From 2018-20, Nakase was a player development assistant for the LA Clippers, after starting with the organization as an intern video coordinator in 2012. Previously, Nakase was the head coach of the Saitama Broncos in Japan for the 2011-12 season, and an assistant coach for the Tokyo Apache in 2010-11. Nakase started her coaching career with the Wolfenbüttel Wildcats of the Damen-Basketball-Bundesliga in Germany from 2008-10. The Huntington Beach, Calif., native played two professional seasons in the NWBL and three seasons at UCLA, where she averaged 5.3 points and 4.0 assists in 69 games.

Holguin enters his fifth season with the Clippers organization. Starting out as an assistant video coordinator in 2016-17, Holguin was promoted to head video coordinator in 2017-18 and coaching associate in 2019-20. The El Paso, Tex., native graduated from the University of Texas at San Antonio (UTSA) in 2012 and served as the assistant director of operations for the UTSA men’s basketball team for the 2014-15 season.

Martin comes to Agua Caliente after coaching Team Takeover of the Elite Youth Basketball League, where he served as the program’s 16U head coach. Martin helped more than 150 youth players to Division I basketball teams, including NBA players such as Kevin Durant, Josh Hart and Ty Lawson. Martin played collegiately for Viterbo University from 1990-94, appearing in 87 games. 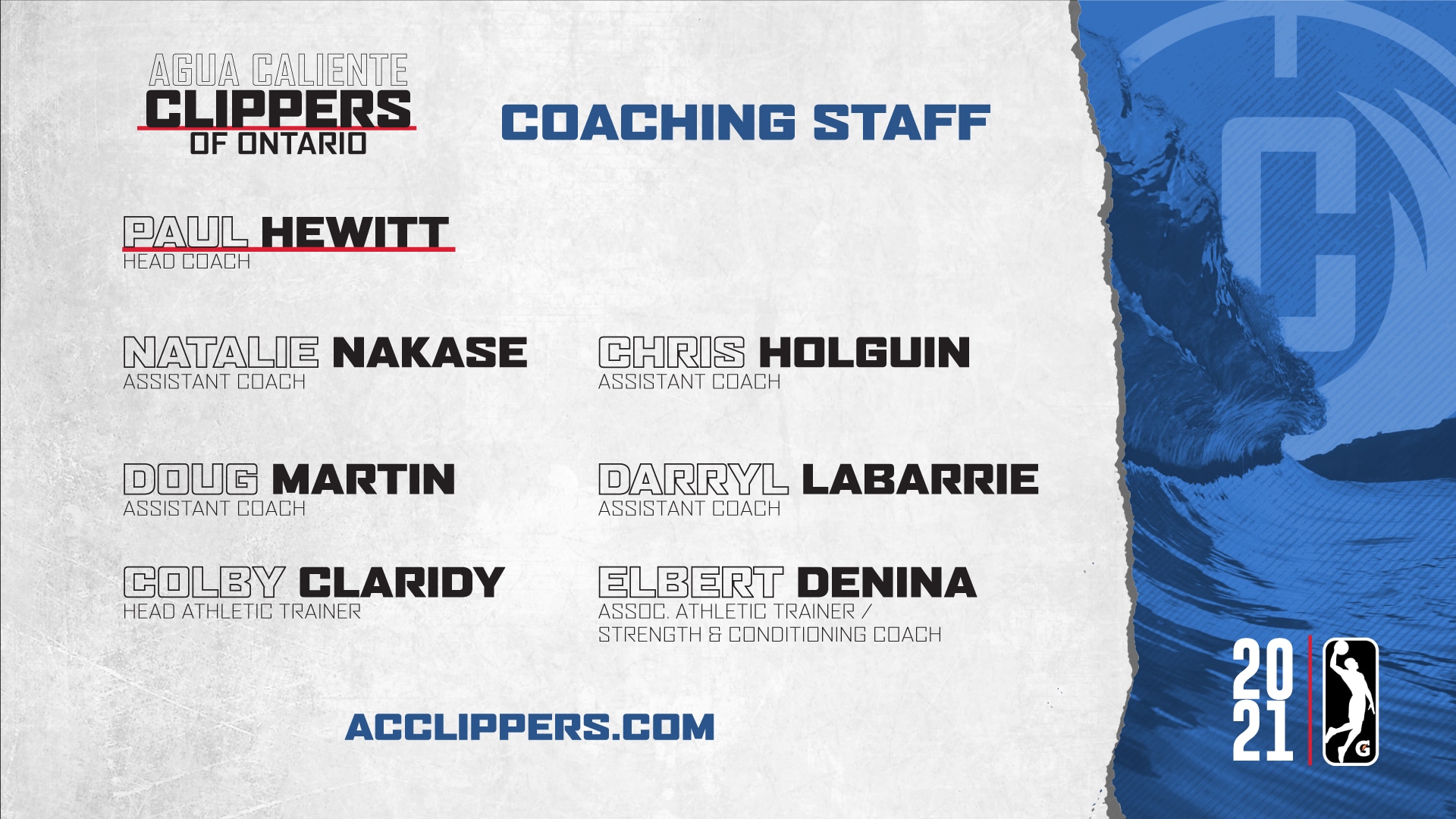