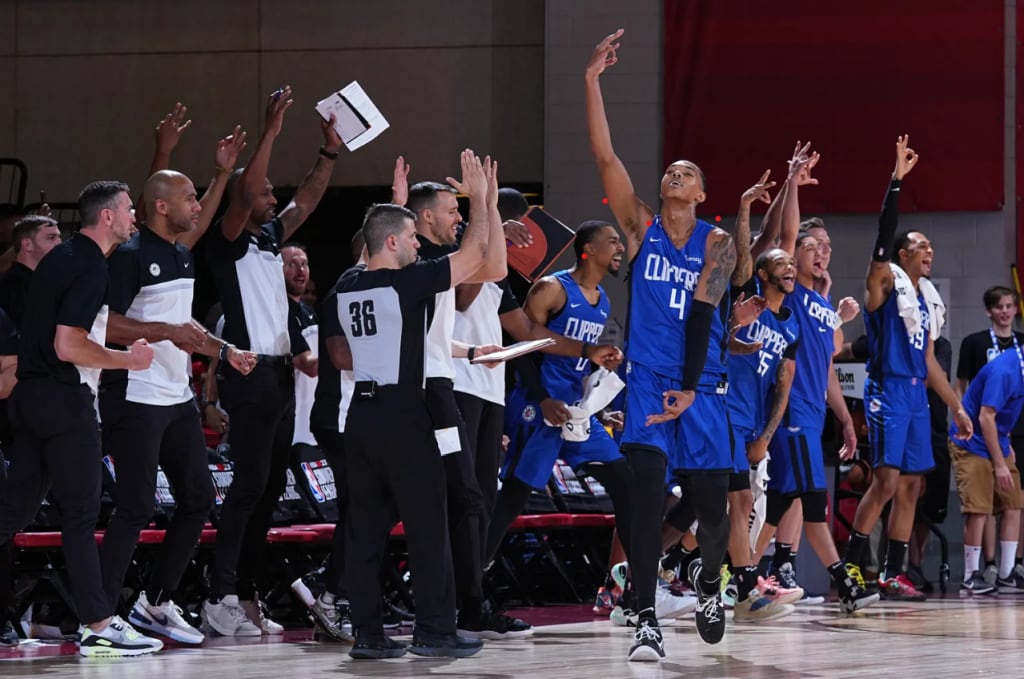 In an 18-point rout of the Memphis Grizzlies, the Los Angeles Clippers opened up their NBA2k23 Summer League in Las Vegas with a resounding win, and with a number of takeaways that should make fans hopeful of a bright future.

The primary difference between watching Summer League games and early regular season games, as a Clippers fan, is what I’ve been watching for. Knowing that at most, only four or five of these players are going to see a single minute of action in a full-fledged Clippers uniform. Instead of finding hope in good team habits, my eye has been on those individual players that we’ll likely see again.

Jason Preston was described by some, in pre-draft analyses, as the second-best passer in last year’s draft class. In his first game since Summer League last year, Preston showcased that the year spent on the sidelines, watching film and picking the brains of his teammates, was not in vain. Leading all players tonight in assists, with 6, Preston also showcased a reliable floater, which he turned to a number of times this game and could elevate his ability as a third-string playmaker for the Clippers.

Brandon Boston Jr., who has spent a year and an offseason putting on some muscle and learning to play basketball at the highest level, showcased an increased defensive awareness and playmaking ability. After a career-high 27 point performance against the Boston Celtics last season, we saw glimpses of what the sophomore year microwave scorer could do putting the ball in the basket. Notably, Boston Jr. was the Clippers’ second-leading scorer, led the team in plus-minus, and was clearly the first option on the offensive end. After this first game, however, Clippers fans can find comfort in knowing that Boston Jr. is continuously working on expanding his game, beyond scoring.

While Jay Scrubb struggled on offense, his energy and intensity were undeniable this first game. The Clippers’ second round pick from 2020, who is running out of opportunities to compete for a spot on LA’s roster, shot just 4-for-11 from the field tonight. Despite his shot not falling, however, Scrubb continued to attack Memphis on the defensive end. It’s worth watching Scrubb, who passes the eye-test and has shown glimpses of an ability to be a multi-level scorer. If nothing else, it’s clear that he really wants that two-way contract. He has a few more games in Las Vegas, as well as training camp, to show he deserves it.

There were a couple possessions in which Moussa Diabate, the Clippers’ rookie, single-handedly fought for and successfully earned a second shot opportunity for the Clippers. While he is likely still at least a season away from really impacting the Clippers’ win column, this energy is one thing to keep an eye on. It’s why Lawrence Frank and the Clippers front office decided to take a flyer on him, and it could be key to him earning minutes sooner rather than later.

This first game, there seemed to be a focus on selflessness and communication. Shaun Fein, who heads the player development program, has solidified a spot on head coach Ty Lue’s bench. And I, for one, am excited to continue seeing Fein’s fingerprints on this team, and especially it’s more junior players, this coming NBA season.

Other honorable mentions include Xavier Moon, who displayed a solid ability at running the offense and has reportedly been invited to training camp and will compete for a two-way contract, and Reggie Perry, who led the Clippers in scoring and could earn an invite to training camp as well, if he continues to play as well as he did this first game. He will get a chance to do just that, as the Clippers face the Los Angeles Lakers next, on Tuesday.